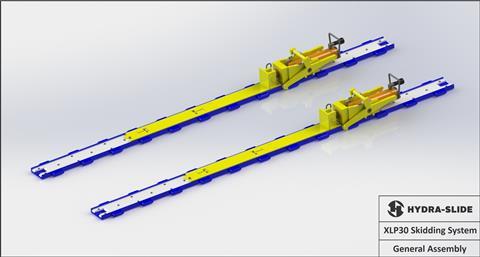 The supplier of hydraulic skidding systems and specialised moving equipment said that it identified a need for a fully engineered, safe method for moving loads considered too small or light for traditional skidding systems.

Janine Smith, vice president at Hydra-Slide, elaborated: “Traditionally, our skidding systems have been used for relocating, transloading or removing large, heavy, and specialised loads, such as power transformers, heat exchangers and generators – usually nothing under 100 tons (90.7 tonnes).

“We have seen increased demand for scaled-down versions of these systems that will enable a rigging crew to execute work where a high-capacity system is overkill. This leads some contractors or maintenance crews to perform the work in less reliable ways – such as using winches or rollers – because a safe, controlled slide system did not exist.”

The XLP30 offers all the advantages of a traditional skidding system in a smaller and more compact package. It is rated at 30-ton (27.2-tonne) push capacity.

Don Mahnke, president at Hydra-Slide, added: “Pump carts, dollies, and forklifts are typically undersized for this weight range, and they require significant space to operate. Conversely, gantries, cranes, and traditional skidding systems are oversized for this type of work, and also expensive to mobilise. The result is a lot of jury-rigged solutions using rollers, ropes and pulleys, overloaded dollies – approaches that can be not only difficult, but dangerous for both the commodity and the personnel moving it,” explained Mahnke.

The XLP30 is mechanically controlled, hand-portable, easy to set up and operate with minimal personnel, and features a self-ratcheting track design with easy conversion from push to pull mode.

Hydra-Slide added that no special training or certification is required to operate the system, giving maintenance crews and plant workers the ability to execute repair and replacement work in-house. The system is modular and can be set up temporarily or as a semi-permanent installation for extended use, and an ergonomic and portable 110V electric power unit is included as standard, producing skidding speeds of about 50 ft/hour (15 m/hour).

The first functional XLP30 prototype is in production, and will be officially added to the company’s expanding suite of hydraulic skidding products in the second quarter of 2021.