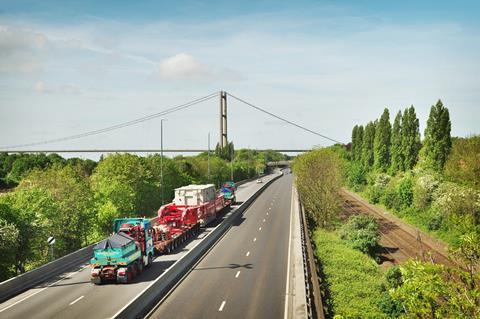 Hitachi Energy, which is manufacturing the transformers, appointed Allelys to complete the transport scope. This week the unit was successfully moved from the port of Hull to the first convertor station off the A1079 near Beverley in East Riding. Three further deliveries are scheduled through the course of May.

A second converter station is also being developed in East Riding and transformers will be delivered here next year. Hitachi Energy is due to start work on the third convertor station on Teesside later in 2022.

Dogger Bank wind farm is being built in three phases known as A, B and C. The project is a joint venture between SSE Renewables (40 percent), Equinor (40 percent) and Eni Plenitude (20 percent).   When it comes online, it will be the world’s largest offshore wind farm.

Dogger Bank wind farm transmission package manager, Børge Angelfloss, said: “Our thanks go to all those involved in ensuring this happened safely, including the local highways authority and representatives from Humberside Police for their valuable expertise on the route between port of Hull and our convertor station site.”