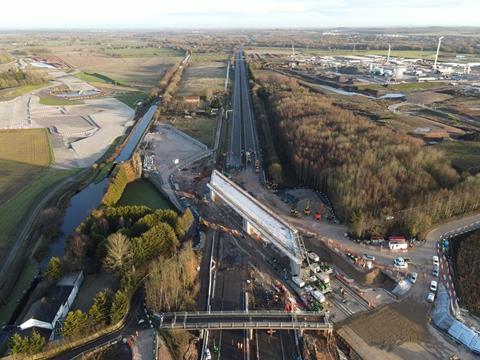 The operation, which took place between December 24-26, involved approximately 450 of BBV’s people and took 40 hours to complete, HS2 said.

The 86 m-long structure, developed by design joint venture Mott MacDonald and Systra on behalf of BBV, was built on land next to the motorway over a period of six months.

The sliding mechanism – designed by specialist civil and structural engineering company, Freyssinet – allowed the box to be pushed into place over the motorway on a guiding raft in one movement, according to HS2, meaning only two one-week closures of the motorway over a 12-month period.

On the operation, HS2 civils delivery director, Mike Lyons, said: “This is the first box slide of its kind over a motorway in the UK, and we believe it’s also the world’s longest slide, so it’s a great achievement for HS2 as we quickly approach peak construction.”

Once complete, HS2 said the structure will measure around 190 m in length. The bridge will connect to Dunton Wood Embankment to the south and the Birmingham and Fazeley Canal Viaduct to the north.