BigLift delivers the goods to Baffinland

In the north of Canada, Baffinland Iron Mines is expanding its mine at Milne Inlet. BigLift Shipping delivered vital components to support the expansion over the course of three shipments. 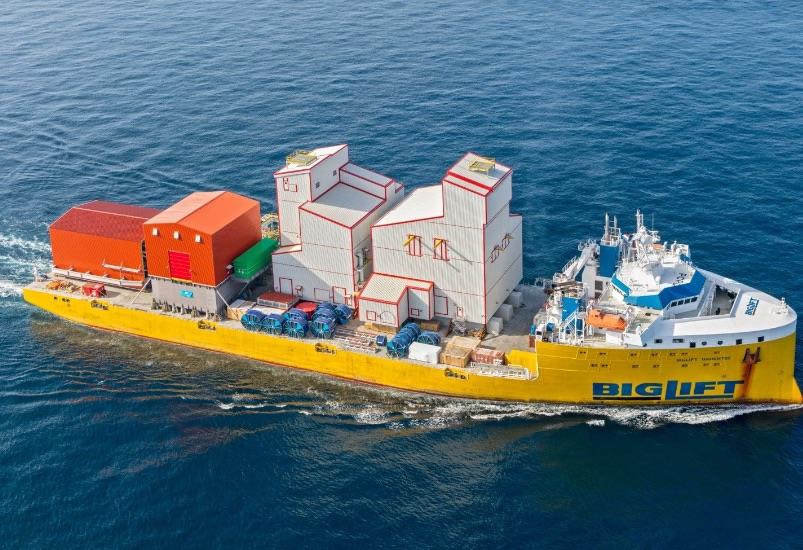 Baffinland Iron Mines wanted to increase the capacity at its mine but the extremely remote locations, with a very short ice-free period, makes cargo deliveries extremely challenging.

The equipment required to expand operations has to be pre-fabricated and delivered within just two ice-free months. BigLift was awarded three shipments for this project. Due to the very short weather window for heavy lift shipping, all three allocated vessels were required to discharge their cargoes in direct succession.

With the bulk jetty unsuitable for heavy cargoes and no port facilities in place, BigLift was tasked with devising a plan to move the factory structures safely onto land.

At at the end of a temporary road, the shallow waters near the shore were bridged with a barge, which was kept in place with spud poles. However, this reduced the working window even more.

A major challenge arose, when the discharge of components from BigLift Barentsz had to take place over the stern. BigLift said that it was vital to “pin the ship down”, so that nothing would move or sway during the discharge operations. Eventually, BigLift Barentsz was moored just before the barge, leaving a small gap, in order to avoid creating a 300 m-long “weathervane” that could break the barge off of its spud poles.

Also included aboard the ship was the car dumper building and the positioner hall, plus a quantity of auxiliary pieces. The enormous modules were discharged by SPMTs that had been brought along from Bremerhaven.

Due to a dearth of handling facilities at Milne Inlet, the vessel’s anchors were assisted by mooring lines that were attached to an underwater mooring system. With BigLift Barentsz steadily moored, the modules were very carefully driven off the vessel’s deck – over a bridging construction to the barge – making it possible to closely monitor pressures and shifting weights.

Shortly afterwards, Happy Diamond arrived from Haiphong in Vietnam with part of the conveyor belt system. Molengracht followed hot on her heels with more conveyor belt parts, which she had loaded in Haiphong and Ho Chi Minh City.

These vessels moored perpendicular to the barge, which entailed a completely different mooring system to that of BigLift Barentsz, but almost equally complex, due to the positioning and strength of the underwater mooring arrangement, said BigLift

After a safe and successful discharge, BigLift Barentsz left the scene to sail the Arctic route West Passage to Asia, whereas Molengracht and Happy Diamond sailed south towards the Atlantic to pick up their next cargoes.