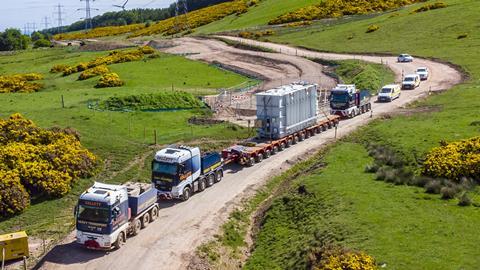 Collett was contracted to provide a door-to-door service, including the project management, engineering and the transport of the two reactors.

The shunt reactors were transported in three stages before arriving at the substation site. First, Collett worked with a European partner to arrange the delivery to the port of Leith in Scotland, including the chartering of a suitable vessel.

Once at the port, Collett utilised an 800-tonne capacity crane to discharge the units onto a dedicated 14-axle line modular flat top trailer. Both shunt reactors were then offloaded onto stools for temporary storage. Collett also transported and stored multiple ancillary components at its port side depot in Grangemouth.

At the onshore substation site, located in the Lammermuir Hills, Collett’s heavy lift team offloaded and positioned the shunt reactors into their final position using a hydraulic jacking and skidding system.

The second part of the project is expected to take place in the coming weeks, when two 180-tonne supergrid transformers are due to be delivered to the site.