The 20,300 dwt FPSO Curlew has been successfully brought ashore for decommissioning in Norway. 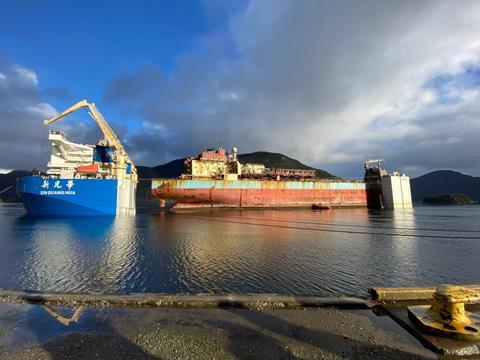 The 20,300 dwt FPSO Curlew has been successfully brought ashore for decommissioning in Norway.

The FPSO operated in the North Sea for more than 20 years. Four tugs and two line vessels were used to unmoor the FPSO and tow it to the floatover position above the semi-submersible Xin Guang Hua.

748 axle lines of SPMTs were then used to transport the ship onshore. AF Gruppe said that the FPSO deflected during lifting and transport, so shimming was used to maintain stability. Curlew was placed ashore and preparations are under way ahead of its demolition. AF Gruppe said that 95 percent of the materials are suitable for recycling.