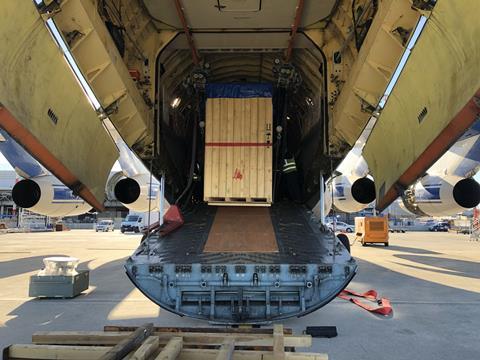 deugro was tasked with the time-critical delivery directly to the project site because the impact of Covid-19 forced the client to switch the mode of transportation from road to air to keep the time schedule of the site construction. The transit time for land transportation was around 35 days, but air transportation allowed the time to be shortened to less than 20 hours for each flight.

For the transportation, deugro’s experts chose the Ilyushin Il-76 – a ramp cargo aircraft that offers a large cargo hold and the ability of self-sufficient loading and offloading using the on-board internal crane system.

For each flight, deugro arranged the pick-up from the suppliers’ facilities and the delivery to Malpensa Airport in Milan by road. deugro coordinated the terminal cargo handling and loading into the aircraft. Due to the long flight distance of almost 8,000 km, all three flights needed a technical stopover.

Since all prior arrangements for offloading at the destination airport – Ignatyevo in Blagoveshchensk – were also made by deugro with the local Customs office, every batch of equipment was safely transferred onto trucks directly after offloading from the aircraft. This ensured the cargo reached the final destination at the project site in the city of Svobodny on time.

“One important ingredient to the success of this complex transport was the ability to organise these air charter flights with our own internal air charter desk – something that deugro has invested in by a team of experts well-known in the industry and with a cargo airline and air charter brokerage background,” said Marco Furgada, branch manager Segrate/Milan at deugro Italy.

One of the last-minute challenges was difficult weather conditions on the departure day of the first flight. While all flight arrangements were planned and prepared, fog and low visibility on the runway at the intended airport for the technical stop in Kazan delayed the departure from Milan.

After monitoring weather reports and forecast updates, the airport for the technical stop was changed to Samara, which allowed the flight to proceed. To ensure the flight schedule was maintained, deugro coordinated with the carrier on short notice to provide the crew swap to the new airport, allowing the aircraft to continue its journey to Blagoveshchensk immediately after refuelling without any lost time.