After 15 months of construction, and nearly two years since the collapse of the Morandi Bridge, the Genoa San Giorgio Bridge has been officially inaugurated in Genoa, Italy. 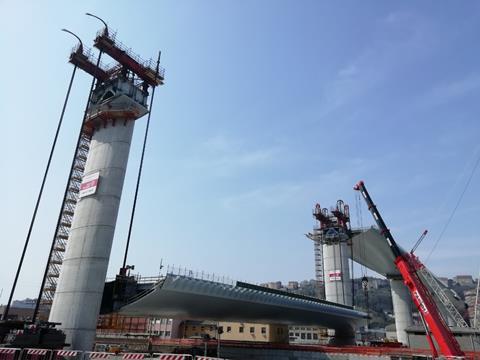 A consortium of Salini Impregilo (now Webuild) and Fincantieri Infrastructure – PerGenova – was tasked with the construction of the bridge following the collapse of the Morandi bridge in August 2018, which cast a light on the poor state of Italy’s road transport infrastructure.

Speaking at the inauguration, Webuild ceo Pietro Salini said: “This bridge must remind us of the importance of maintaining the upkeep of the infrastructure that we use every day, and how important it is to give our country new infrastructure that, like this one, can support the economic development of entire cities and regions.”

He added that the PerGenova consortium worked alongside more than 1,000 people and 330 small and medium-sized businesses, one of which was engineering and heavy transport specialist Fagioli, during the demolition of the Morandi Bridge and the construction of its replacement.

As one of the primary partners, Fagioli was tasked with the transport of new bridge sections. This included 237 sections, weighing between 56 and 89 tons (50.8 and 80.7 tonnes). Components were discharged at the port of Genoa and transferred to the construction site along dedicated routes.

To avoid impacting city traffic, Fagioli said that 60 heavy transport operations were carried out at night. The various components were then assembled on the ground and lifted into position, at a height of 50 m.

SPMTs were used to move the larger spans, which measured 100 m long and weighed approximately 2,000 tons (1,814.4 tonnes). For these lifting operations, a strand jack system was deployed, along with a 1,250-ton (1,134-tonne) capacity crawler crane.