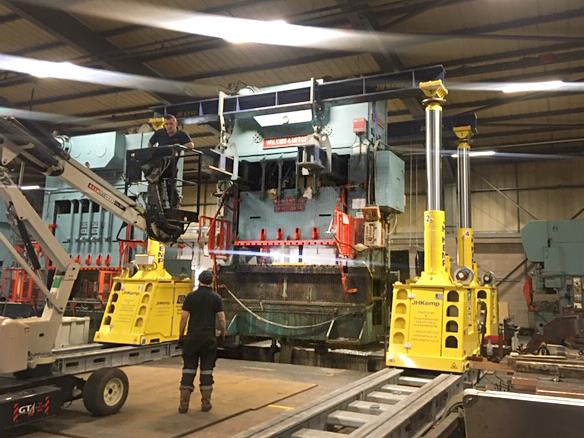 The press was being relocated within the same building, so JH Kemp used the Enerpac SL400 gantry to move the machine without dismantling and reassembling it. This saved the client – Salop Design & Engineering, a metal pressings and assemblies manufacturer in Telford, UK – three weeks’ downtime.

JH Kemp said: “After some preparatory work involving removal of the press feed conveyors, a minimum amount of guarding, floor plates around the press and bolts holding the press in position, the press in its entirety was lifted off the its foundations using the gantry. It was then moved along the gantry tracks to its new position in the press shop.

“Once in line with the new position the Enerpac SL400 gantry was re-rigged and the press uplifted and placed on to the prepared press foundation.”