Mammoet has moved two main supporting structures of a bridge over the Danube River in Linz, Austria. 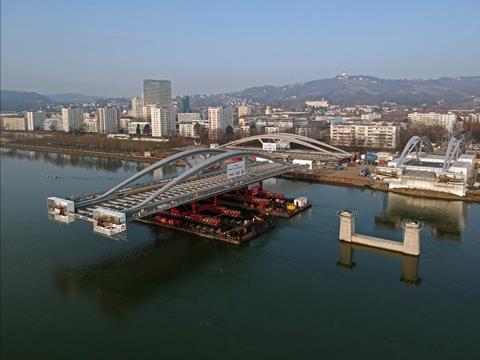 MCE tasked Mammoet with moving the two structures from the pre-assembly area on the side of the Danube to the piers in the middle of the river. During the preparatory engineering phase, Mammoet’s team received the information that the two steel structures would be heavier than first planned, due to necessary additional strengthening measures. Thus, the original engineering concept had to be adapted as quickly as possible without affecting the project’s tight schedule. Each unit weighed around 2,800 tonnes and measured 100 m long and 32 m wide.

Mammoet deployed its Mega Jack 800, which was able to raise the bridge segments from their pre-assembly height to the float-in height quickly and safely, according to Mammoet.

The bridge segment could now be driven onto the barges with the SPMTs and precisely rotated into its final position with winches, floated in and then lowered onto the bridge piers for installation.

Mammoet said that water levels had to be monitored carefully, as high or low water would have meant delays. Foggy conditions did cause a slight delay during the project, which was executed over the course of 11 days.