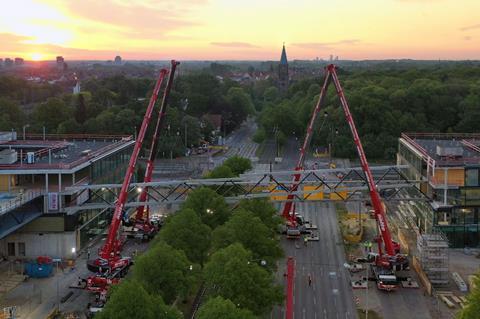 The crane and heavy haulage contractor employed an LTM 1250-6.1, three LTM 1200-5.1s, and two smaller mobile cranes for the operation, which took place during the night.

The bridge was made up of four components and several connecting elements. Due to overhanging trees, traffic signs and tram line cables, the complete construction could not be hoisted from the ground. Instead, the opposite bridge sections were connected in the air then positioned on the abutments at a height of 8 m between two buildings of the newly erected headquarters of manufacturing company Continental.

Each of the trussed girders, which measured 36 m in length and weighed 38 tonnes, were hoisted into their position by one of the four large cranes.

The four Liebherr cranes held the bridge sections for 22 hours whilst the two smaller cranes installed 70 steel top and bottom chords for the side lattice components.

Jürgen Peters, sales manager at Nolte, said: “We arrived with our cranes on Friday evening, 22 hours later the bridge had been installed and the safety equipment under the skywalk was installed on Sunday evening.”