C.H Robinson has coordinated the delivery of two 121-tonne machine components from a supplier in Dalian, China, to a site in Holiday City, Ohio, USA. 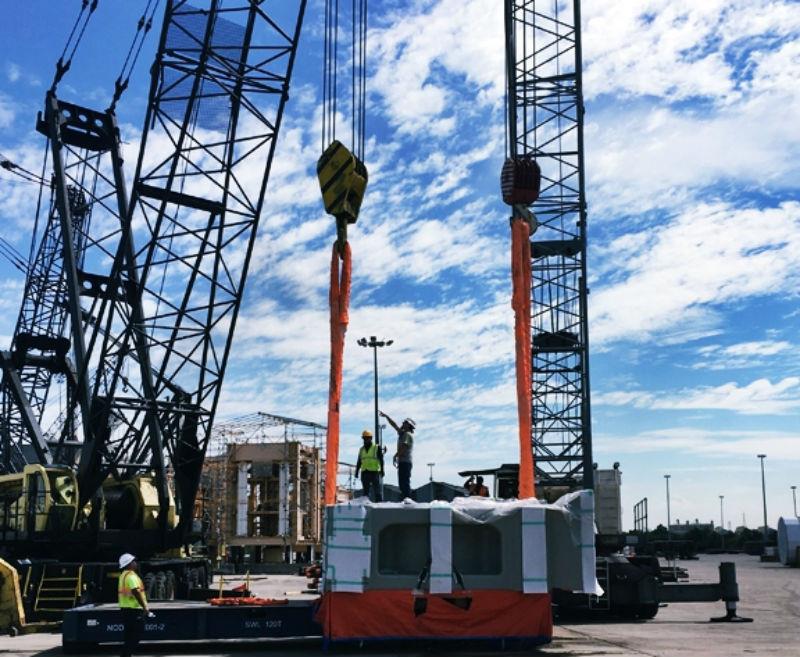 The cargo consisted of two large molds, known as platens, which measured 5.3 m x 5 m x 1.6 m. The cargoes were delivered on two separate sailings ex-Shanghai to the port of Houston, Texas.

Just before the first platen was scheduled for pick up in Dalian, the C.H. Robinson team learned that the lifting slings would not be supplied. The team had to source suitable slings locally and share the test certificates before the platens could be lifted and placed onto the vessels.

When the platens arrived at Houston, the tarping had torn during the ocean voyage. To ensure that the cargo was fully protected, the project logistics team arranged to have the pieces shrink-wrapped at the port before the 1,200 mile (1.931 km) overland journey to the final destination.

In Houston, C.H. Robinson utilised a ten-axle Goldhofer trailer with both pull and push trucks attached for the inland portion of the journey. Carpet remnants were placed between the platens and the chains, which were being used to secure the cargo to the trailers, to protect the platens from potential damage.

The original plan was to unload the first platen and then truck it to Ohio, before returning for the second platen's arrival three weeks later. However, bank holiday traffic through Kansas and severe weather caused delays to the first delivery.

These delays meant that that the trailer combination would not get back to Houston in time to perform a direct discharge from the oceangoing vessel. Instead, the second platen was discharged onto a Mafi trailer and placed in storage at the port.

Meanwhile, a second truck and another ten-axle line Goldhofer trailer was mobilised to the port of Houston. Two shore cranes were used to re-load the platen in preparation for the final leg of the journey.