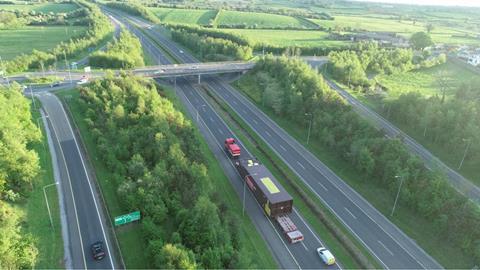 The combined weight of the cargoes amounted to 3,000 tonnes. This included 24 items that measured 5-6 m wide and weighed up to 142 tonnes each. The most challenging modules to transport, Potteries explained, were units that weighed over 140 tonnes and measured 34 m x 5.8 m x 4.1 m.

During the initial phase potteries worked with the client to identify the most suitable port and route to the site, undertaking route survey’s, assessing the structures and then working with the client to design the modules to the maximum size for road transportation.

Before the deliveries could take place, Potteries arranged for trees to be cut back and street furniture removed, and obtained the relevant permits. The company also arranged for police escorts and pilot cars for the road transportation.

The cargoes were shipped to Greenore port in Ireland from various locations in China, India, and Europe as well as the UK, on board BigLift Shipping’s Happy Star, Amasus Shipping’s Eemslift Nelli, BBC Chartering’s BBC Greenland and AAL Shipping’s AAL Galveston (previously called the Pacific Alert).

At Greenore port, Potteries designed and supplied support stands for the cargo and oversaw the discharge operations of all four ships. The modules were then stored at the port awaiting delivery to the final destination.

For the road transport, Potteries deployed ballasted tractor units and modular trailers with Goldhofer’s Addrive System, which the company said gave additional traction on steeper gradients along the route and the ability to manoeuvre the trailer without a tractor unit when space was limited.

Potteries used the modular trailer with Addrive in the port for the discharge operations – using the Addrive to manoeuvre and the trailer’s hydraulics to offload the cargo onto stands.

The cargoes then travelled 129.4 km to the project site. At the construction site, the stands and trailer hydraulics were used once again to transfer the cargo onto SPMTs. Potteries worked with Gabriel O’Brien Crane Hire to provide some of the road movements to the final lifting point on site. 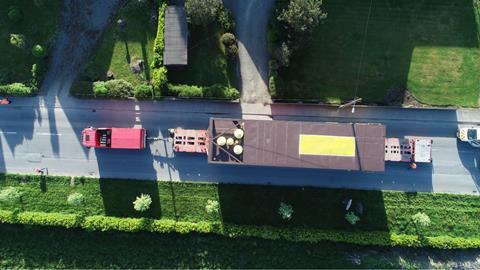 Operating during the pandemic was the first major hurdle, Potteries remarked, with the first shipment arriving at the port during the initial lockdown in Europe.

“Construction in Ireland ground to a halt but freight was allowed. This did allow our drivers and operators to complete the discharge of the ships in the port. Fortunately, we were able to work closely with our Irish partners to ensure the project ran smoothly,” Potteries explained.

There were also 68 notable structures along the route, added the transport specialist. This included the Mary McAleese Boyne Valle suspension bridge, which had to be closed to enable the safe passage of the larger components. Pre and post structural assessments were conducted for this part of the route as well as other structures requested by the authorities, said Potteries.

The company added: “The second largest challenge was working with the various Irish authorities for authorisation to cross certain structures. The vehicle movements were amongst some of the largest undertaken across the structures.”