Roll Group’s vessel Rolldock Sea arrived at the Rhenus Cuxport terminal in Cuxhaven, Germany, where it was loaded with a backhoe dredger destined for Mozambique. 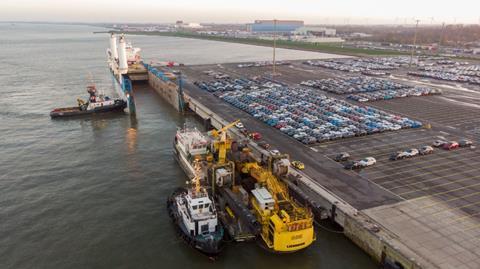 Rolldock Sea submerged its stern by flooding its ballast tanks, enabling the Gian Lorenzo Bernini backhoe dredger (BHD) to float on to the vessel at water level, aided by two tugs.

Rhenus Cuxport said the facilities at berth four, with a draft of 15 m, made it possible to load the dredger in this way. “It is important to have a particularly deep draft in the port to complete this kind of floating manoeuvre,” Rhenus Cuxport explained.

Rolldock Sea is now on its way to Mozambique, where the dredger will be deployed for the construction of an LNG terminal.