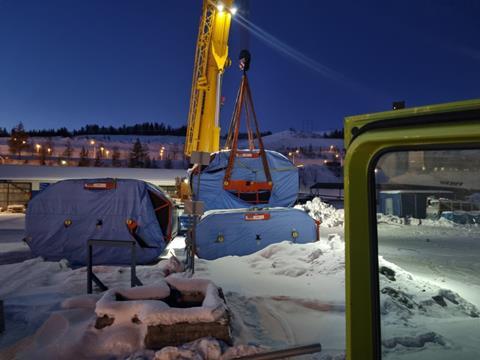 Trilog delivers mining equipment from Asia to Gällivare for LKAB.

Sweden’s Trilog recently coordinated the transport of mining equipment from Asia to Gällivare for LKAB, which is based in Malmberget.

Three 50-tonne pieces, as well as a 30-tonne conveyor, were shipped to northern Sweden. After transiting via Terneuzen, Belgium, and through thick ice on the Sea of Bothnia to the port of Piteå, the cargoes were loaded onto lowbed trailers for final delivery to the consignee’s jobsite. The weather conditions were snowy with temperatures dropping to -15°C.

Kaleido sourced a suitable ro-ro carrier for the project and arranged the Spanish inland transportation, facing extreme fog with poor visibility along the way to the port of Santander. Once the cargo arrived in Finland, Procargo organised the transport from Hanko during night hours in the harsh winter climate. All cargo was delivered safely to the jobsite in the woodlands nearby Pori.