When ArcelorMittal decided to equip its steel mill in Dunkirk, France, with a new overhead crane to carry the steel ladle, they turned to Sarens’ engineering expertise to make it possible. 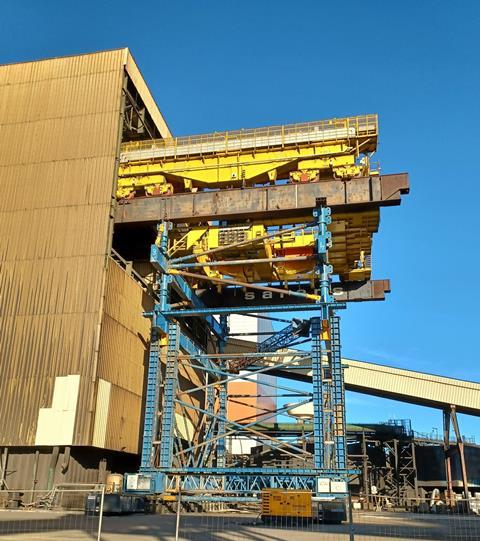 When ArcelorMittal decided to equip its steel mill in Dunkirk, France, with a new overhead crane to carry the steel ladle, they turned to Sarens’ engineering expertise to make it possible.

In March of 2022, Sarens was entrusted with providing, transporting and installing two 75-tonne, 40-metre long box beams on which the new overhead crane could be secured and assembled, and then installing the overhead crane in an operation that spanned just over three months.

Sarens mobilised two 200-tonne capacity telescopic cranes to lift and position the box beams. Then, the crew deployed Sarens’ specialised engineering solution, an SPMT equipped with four Sartowers and eight 185-tonne strandjacks, to pick up, jack up, and transport the overhead crane.

This 18-metre high Sartower system proved ideal for picking up the completely rigged overhead crane and box beam from a low height and then lifting to approximately 30 metres. It was also the first time Sarens has deployed four Sartowers with strandjacks for such a lift, which required the design and construction of a lifting beam as well as connection plate to make the Sartowers and strandjacks work together.

To make it all work, Sarens first assembled two lines of 22-axle SPMTs and built a two-level steel structure on the trailer. The first level was a jacking system with a double Sarlift 2500 system for lifting the overhead crane. The second level was a steel structure composed of MB 1500x600 and BS 610 columns, all braced with the BS 324 system. Sarens had to construct a lifting beam and connection plate for the Sarlift system, as well as connection eyes for bracing that could be bolted to the modular beam. The result was a strong and stable setup for lifting approximately 800 tonnes.

The overhead crane to be installed had been fully built outside the hall in which it would be used. With careful planning and precision, and while activity at the plant had been minimised during a 30-hour window, Sarens lifted it into its final position. At the front of the hall, Sarens jacked the overhead crane to exactly the correct level so that the client could pull the overhead crane out and roll it directly on its rails.

In total, Sarens required 2,5 weeks to assemble the equipment after it had arrived from Wolvertem and Gent. The equipment remained on site for a total of five weeks.

Sarens is proud to have been part of this inspiring engineering challenge and wishes our client all the best with the newly-installed overhead crane.