Victor Avdieiev, deputy general director (operations and administration) for Ukraine’s Antonov Airlines, shared his views on what has been an incredibly demanding 12 months for the company and its staff. Nevertheless, the company and the country remain united in the face of oppression. 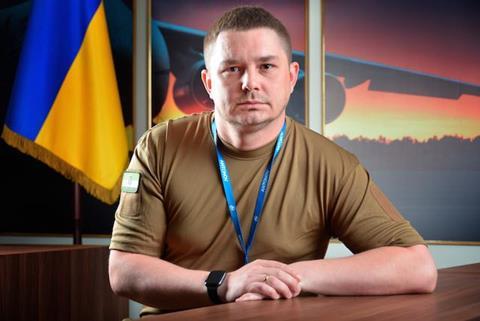 The events unfolding in Ukraine have been harrowing to see. “The employees of our enterprise, like the entire people of Ukraine, are currently in rather difficult conditions. However, we continue to work, do everything possible to preserve the enterprise and fulfil our professional duties,” said Avdieiev. “Many of our employees defend the country in the ranks of the Armed Forces and help a lot on the volunteer front. We are all united by a common desire to win. Everyone is doing what they can to bring that day closer. Ukraine is currently more united than ever.”

Despite the chaos, Antonov Airlines aircraft have remained in service, providing valuable support to the war effort whilst maintaining commercial services. During May, the airline’s home base at Kyiv-Antonov airport in Hostomel was destroyed, along with the AN-225, an AN-74 and an AN-26-100 aircraft. Antonov Airlines swiftly transferred operations to Leipzig, Germany.

“We partially moved the airline to the city of Leipzig in order to ensure smooth operation, the key task was to move the base to a safe place,” Avdieiev explained. “Since 2006, when the implementation of the SALIS project began - the execution of strategic air transportation in the interests of NATO countries by the aircraft of the Antonov air fleet – Leipzig/Halle airport has become a second home for our aircraft.”

Avdieiev was confident, however, that the relocation is only temporary. “After the victory over the racist occupiers and carrying out complex works to restore the operability of Kyiv-Antonov-2 airport, it will once again become the base for the Ruslan fleet of Antonov Airlines.”

Heavy lift air cargo capacity has been dramatically reduced since February. Globally, just 35 AN-124 aircraft are in service or storage. Russia’s Volga-Dnepr operates 12 and are beyond the reach of many customers due to economic sanctions, while Russia’s air force owns/operates 13, according to Cirium fleet data. Antonov Airlines has another seven AN-124-100s – five of which are operational.

Concurrently, commercial activities have continued. Recent examples include the delivery of a telecommunication satellite from Toulouse, France, to the NASA Shuttle Landing Facility in Titusville, USA during October, and three flights to deliver a gas power plant generator and associated equipment from Ljubljana, Slovenia, to Kano in Nigeria. 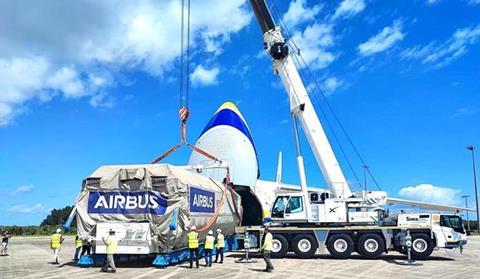 Antonov worked with Bolloré Logistics to deliver a telecommunication satellite from Toulouse, France, to the NASA Shuttle Landing Facility in Titusville.

Working in cooperation with the CAA of Ukraine, Antonov Airlines has set up a maintenance base in Leipzig to keep the aircraft certified and airworthy. “Today, we have the necessary set of spare parts to ensure the airworthiness of the AN-124-100 aircraft fleet until the end of 2023,” Avdieiev explained. Flight crews continue to work in duty and rest mode according to flight safety requirements.

“We look positively to the future, despite all the challenges, and expect that our fleet of AN-124-100 aircraft will be busy enough in the next year,” said Avdieiev. A programme to modernise the AN-124’s D-18T 3M engines to extend the operational life is also under way. “This update will: reduce noise in the field by 10 dB; significantly reduce specific fuel consumption due to the introduction of the FADEC system; reduce smoke and emissions; and increase engine life. A new engine management system will also be used. In addition, new APUs with increased service life are being installed,” he explained. The aircraft are expected to serve in the market until 2038.

The iconic AN-225 Mriya will also be rebuilt. “President Volodymyr Zelensky assured that we will rebuild the AN-225 after we win the war, because the AN-225 is a symbol of Ukraine. Mriya is an airplane that is capable of transporting unique cargo that cannot be handled by any other mode of transport, and is enthusiastically welcomed at every airport in the world. Ukraine, like the entire aviation world, dreams of seeing the AN-225 in the sky again.”

He said that an expert assessment of the surviving elements of the AN-225 will be performed, and there already main airframe components in storage for a new AN-225. “The process of rebuilding Mriya is considered as an international project, with the participation of aviation enterprises of different countries of the world. However, today Ukraine has the most important goal: victory over the aggressor and peace on our land. After that, we will revive the infrastructure, including the flight test base in Hostomel, and rebuild our ‘Dream’.”