Germany-headquartered freight forwarder Bertling has coordinated the transportation of a gas turbine and a generator from Sweden to a power station in Bonn, Germany. 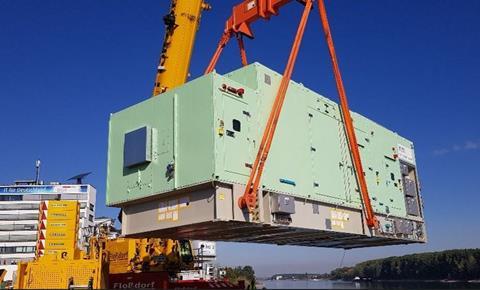 Bertling’s scope began by taking over the equipment on a free alongside ship (FAS) basis in Norrkoping and ended with the items being placed on foundations at the turbine hall.

Extremely low water levels on the River Rhine were overcome by means of a specialised barge, which measured 57 m in length and had a 617-tonne payload.

For oncarriage, the cargoes were lifted and loaded onto trailers. Various bridge strength calculations were provided to authorities, and overhead lines lifted to allow passage of the combination. Some traffic flows were rerouted as the trailers navigated the 8 km route to the jobsite, which was performed over two consecutive nights.

At the power plant, the equipment was reloaded onto SPMTs and carefully moved inside the building, before being placed onto their respective foundations.