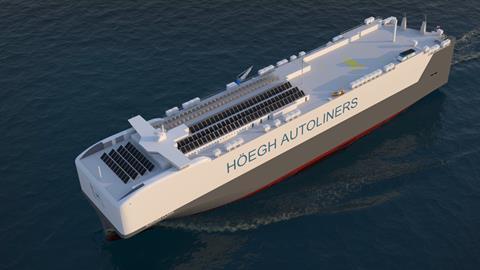 The Aurora class vessel comes equipped with multi-fuel engines that can run on conventional fuels, including LNG, and biofuels. With minor modifications it can transition to use future zero carbon fuels, including green ammonia, said the carrier.

The vessels are designed to have a capacity of 9,100 car equivalent units. They will feature strengthened decks and enhanced internal ramp systems, allowing electric vehicles on all decks while providing more flexibility for heavier project cargo.

“It will be the largest and most environmentally friendly car carrier ever built,” said Andreas Enger, ceo of Höegh Autoliners, adding that the series would allow carrier to accelerate its decarbonisation efforts to meet its net-zero goal by 2040.

Hans Eivind Siewers, segment director passenger ships and roro at DNV added: “With the multi-fuel engine and DNV’s new ammonia-ready notation, Höegh Autoliners is bringing the segment and work to decarbonise the maritime industry to a new level.”

The first vessel is scheduled for delivery by the end of 2023.