NYK’s bulk carrier Frontier Jacaranda has conducted a trial use of biofuel made from waste cooking oil collected and refined in Singapore. 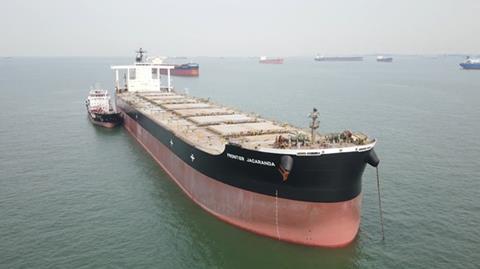 The test run was performed in cooperation with Anglo American, a global mining company, and Toyota Tsusho, a biofuel supplier, on a route to Saldanha Bay, South Africa. This is the second test run performed; Frontier Sky utilised the fuel on a trip to Rotterdam during 2019.

NYK said is looking to contribute to the decarbonisation of the shipping industry by accelerating the conversion of ships to alternative fuels through a series of biofuel trials at bunkering hub Singapore.

Biofuels are considered to be carbon-neutral because the carbon dioxide that is absorbed by the source of the biomass is equal to the carbon dioxide that is released when the fuel is burned, explained NYK. In addition, because the emission of sulphur oxides (SOx) from biofuel is significantly lower compared to conventional fossil fuel, using biofuel also help meet regulations that cap sulphur content in marine fuels.