Over 1,900 workers at the port of Felixstowe – the UK’s largest container port – will begin eight days of strike action on Sunday August 21, ending on August 29, after pay talks failed to reach a satisfactory conclusion. 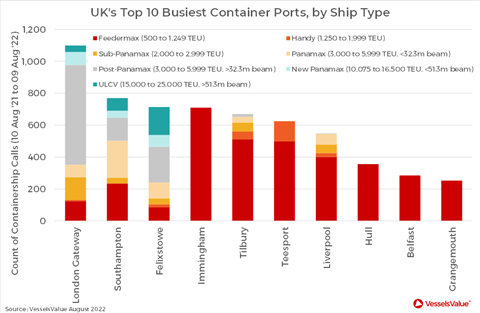 HLPFI reported earlier this month that strike action loomed; trade union Unite said the dispute is a result of the Felixstowe Dock and Railway Company offering a pay increase of 5 percent to its workers – an effective pay cut with the real retail price index (RPI) rate of inflation currently standing at 11.9 percent. Last year, the workforce received a below inflation pay increase of 1.4 percent, said the union.

The offer was upped to a 7 percent pay increase and a GBP500 (USD611) lump sum. Unite said that this is still below the RPI inflation rate and the failure to improve on that offer resulted in a breakdown of talks.

Unite general secretary Sharon Graham said: “Both Felixstowe docks and its parent company CK Hutchison Holding are both massively profitable and incredibly wealthy. They are fully able to pay the workforce a fair day’s pay. The company has prioritised delivering multi-million pound dividends rather than paying its workers a decent wage.”

Strike action will have a huge effect on the UK’s supply chain and will also cause severe disruption to international maritime trade.

Felixstowe has handled 713 containerships in the last twelve months, behind only London Gateway and Southampton, according to data from VesselsValue. However, it has berthed a greater proportion of the larger ship types than either of those two. This includes 175 of the very largest containerships, the ultra-large container vessels (ULCVs), compared to Southampton’s 80 and London Gateway’s 40.

This suggests that with 12 days forewarning before the strike is due to begin, alternatives exist for lines and shippers with any degree of flexibility.