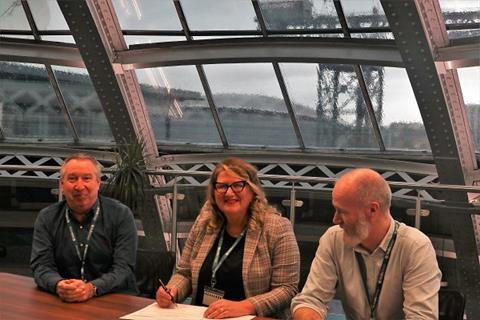 Malin Newbuild specialises in large-scale fabrication projects. Clyde Corrosion has collaborated with the group of several projects in recent years. Together, the companies expect to provide streamlined, turnkey services to the industry spanning fabrication to specialist finishing.

Founded in 2002 by Bonnie Lowson, Clyde Corrosion Control has an established customer base in Scotland and beyond, spanning the oil and gas, nuclear, construction and renewables sectors.

Last year, Malin Group opened its 20,000 sq m G2 shed at Westway Park in Renfrew, Scotland. The fabrication facility, one of the largest of its kind on the west coast of Scotland, houses gantry cranes with lifting capacities of 100-500 tonnes.

The shed was first used to build the first in a series of six lifting structures for the Hinkley Point C power station in Somerset. Malin Newbuild partnered with Malin Abram and Caley Ocean Systems to build and transport large structures for Balfour Beatty, which is delivering offshore elements of the Hinkley Point C nuclear power plant project from its site at Avonmouth.