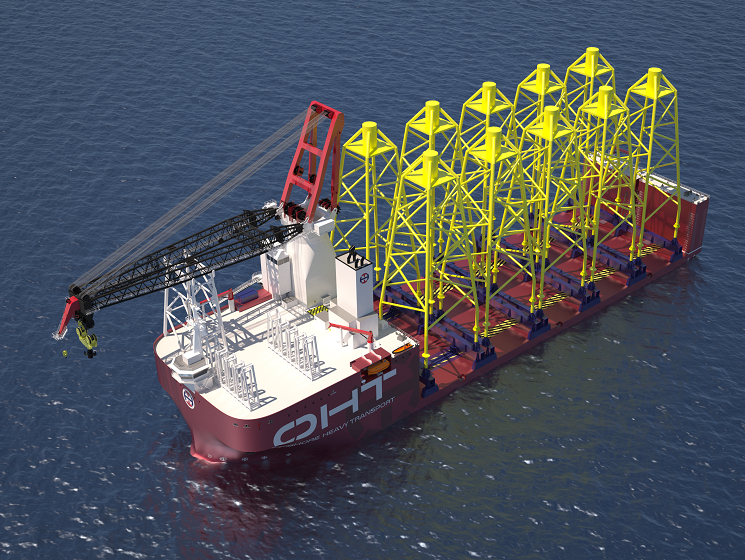 Despite denying earlier reports, OHT has announced that the contract includes options to extend the programme with up to three vessels. The first vessel will be ready for project deployment from early 2021, says OHT.

The design has been developed by OHT in close cooperation with Ulstein Design & Solutions, Liebherr and DNV GL.

The new additions to the existing fleet of five semi-submersible heavy transportation vessels will enable the company to take on full transport and installation (T&I) scope for foundations for offshore wind farms.

“We have one overriding goal with this initiative; to bring down the cost of building offshore wind farms,” said Torgeir E. Ramstad, ceo for OHT.

The Alfa Lift design includes a 3,000-tonne capacity crane and the ability to submerge offshore. Liebherr will deliver the crane which has, according to OHT, been designed to be particularly robust with respect to motions and dynamics. This enables the crane to lift loads up to its maximum capacity in challenging offshore conditions.

Up to ten 1,500-tonne jacket foundations, or eleven 2,000-tonne monopolies, can be loaded on to the decks, transported and installed using the same vessel, says OHT.

The vessel’s main deck will also be fully mechanised with skidding tracks, which are used to move foundations during load-out and installation.

Designed with battery hybrid propulsion, the vessel will feature an exhaust gas scrubber and will be Tier III compliant.

OHT adds that the versatile design of the vessel means it may also serve other secondary markets within heavy transportation. For instance, the beam has been designed to be able to carry topside structures weighing more than 30,000 tonnes.