Rope and Sling Specialists (RSS) has supplied rigging gear to Quattro Group for the urgent removal of a 24 m-long railway footbridge that had been knocked off its foundations by a heavy goods vehicle in South Wales, UK. 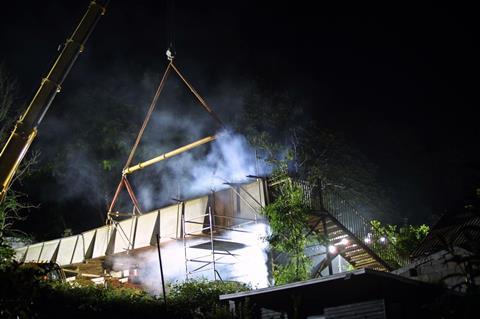 Gary Worsley, site manager at Quattro, explained: “The bridge was cut into sections prior to removal because of the way it had fallen, and each load was cradled as we lifted the pieces.

“We lowered them onto a road rail vehicle and trailers for transportation by rail to a site compound, where they were to be offloaded and cut up into smaller pieces as scrap.”

Commenting on the emergency nature of the operation, RSS regional manager Stephen Littler said: ”Same day delivery is imperative in such situations; without healthy stock levels at each of our regional depots, that kind of service would be impossible to provide to customers like Quattro.”