ALL saves time in rainforest lift 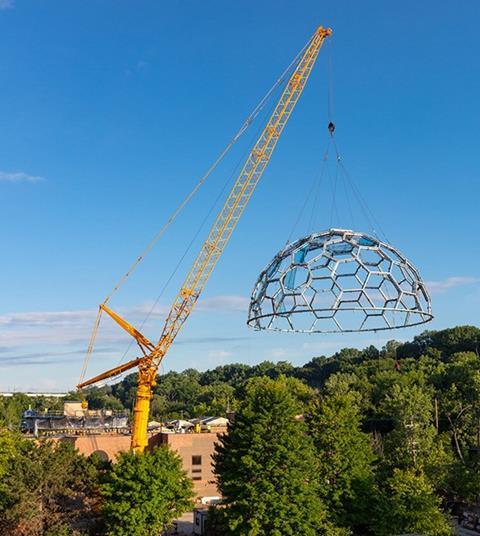 Initial plans called for the dome to be set in four sections and then joined together over the habitat. However, this approach was deemed too time-consuming, said ALL Crane. After some collaboration, a new lift plan was developed — to set the entire dome as a single piece using a more powerful crane.

Using a 600-ton capacity crane with 53 ft (16.2 m) of main boom, 161 ft (49 m) of luffing jib, and 363,800 lbs (165 tonnes) of counterweight, ALL Crane was able to lift the dome to a height that avoided obstructions at the zoo. The crane operator then had to swing the structure 180 degrees to set the dome inside the zoo on top of an existing foundation.

“The previous plans, calling for the dome to be lifted in multiple sections, would have required the smaller crane to be on site for approximately four days,” said Mike LiPuma, sales and rental manager for ALL Crane. “Instead, lifting the dome as a single piece, then holding it in place so it could be secured to the foundation, took only a few hours.”