UK-based Collett & Sons has delivered a replacement bridge to Gooseholme. 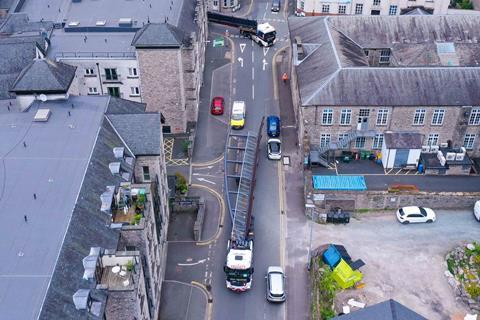 With the original bridge over the River Kent at Gooseholme Park in Kendal irreparably damaged by Storm Desmond in 2015, Cumbria Council undertook a GBP2 million (USD2.4 million) project to build and install a flood resilient replacement. Design work for the bridge began in 2018, with Cumbria County Council working with the Environment Agency to ensure the new structure complimented the Agency’s flood defence system.

Manufactured at Adey Steel’s Loughborough facility, the new bow arch bridge was fabricated in four sections for assembly on site in Kendal ahead of final installation. With fabrication complete Collett began phase one of the project – delivering all four of the bridge sections from Loughborough to Jack Tighes coating facility in Scunthorpe.

With all four bridge sections delivered to site, construction of the final structure has now begun. Once the bridge is assembled, it will be lifted over the River Kent by a 1,000-tonne capacity crane.