Felbermayr and its subsidiaries, Bau-Trans and Haeger & Schmidt, coordinated the delivery of around 100 heavy cargoes from Belgium and Italy to a petrochemical project site in Hungary. 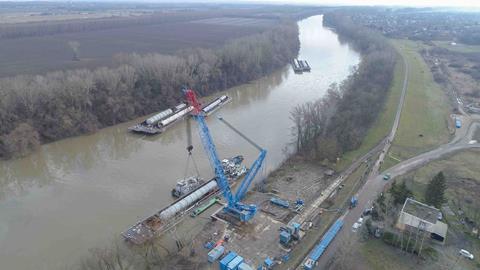 It has been a tough year, but this has not stopped Austrian crane and heavy haulage contractor Felbermayr from completing one of its largest transport jobs in history.

Roughly 170 km northeast of Budapest, the Hungarian oil and gas group MOL is constructing a polyol plant. “This is a flagship project for us, in which we can employ almost our entire range of heavy lift logistics,” said Peter Stöttinger. As managing director of Felbermayr Transport- und Hebetechnik, he also played a decisive role in ensuring the assignment was a success: “Working together with our client, the project department of Schenker Deutschland, I began developing a logistics concept for the petrochemical plant around three years ago.”

The plant is being built on a greenfield site near the town of Tiszaújváros – home to 20,000 residents. The first step of the logistics scope was to plan and develop the necessary infrastructure.

“This included constructing a heavy-duty jetty on the River Tisa for inland waterway vessels. Furthermore, it was necessary to build an approximately 1,000 m-long temporary access road from the transhipping point to the nearest public road,” he said. “From here, it was around 8 km to the site of the plant, which is the size of 56 football pitches.”

Haeger & Schmidt transported the cargoes from Belgium on inland waterway vessels, travelling via the Belgian canal system, the Rhine, Main-Danube Canal and Danube, to the Felbermayr heavy lift terminal in Linz, Austria.

There, the cargoes were stored temporarily to optimise logistics chains. This was the case for a 30 m-long column with an 8 m diameter, which tipped the scales at 200 tonnes. This column was then transported on Felbermayr’s own Lastdrager 30 – a ro-ro/heavy lift vessel – along the river Danube to the mouth of the Tisa.

Felbermayr said that whilst this may seem like a detour, it was necessary as transport by road would have been impossible due to the dimensions of the column.

The cargoes that were suitable for road transportation were put onto low loaders at the Hungarian Danube ports in Gönyű and Budapest, for onward delivery to the jobsite in Tiszaújváros. This required around 25 special transports, some of which were driven in convoys of up to five vehicles.

The components originating in Italy were transported to the port of Constanta, via the river Danube and Tisa, and on to the transhipment point in Tiszaújváros.

Felbermayr utilised a LR 1750 crawler crane to lift the components and position them ready for their final leg of the journey. Two 18-axle SPMTs combinations were used to move the heavier components the last mile. Tractor units with semi low-loaders and vessel beds were used for lighter components weighing around 100 tonnes.

Despite low water levels on the inland waterways and a pandemic with border closures, the project was completed on time over the course of five months. “It was a logistical challenge. We have proven quality cooperation with the employees of Bau-Trans Hungary, who provided the special transports by road, including the permitting procedure and the construction site coordination on location, as well as the inland water transport specialists at Haeger & Schmidt,” said Stöttinger.