Jumbo has deployed its H800-class vessel Jumbo Vision to carry out works for Subsea 7 in Norway. 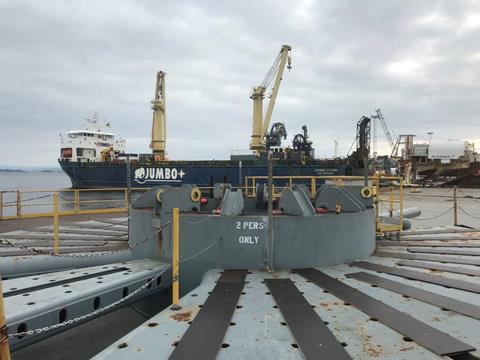 Jumbo Vision picked up an empty 24 m-diameter carousel from Subsea 7’s headquarters in Dusavik before sailing to Halden to collect a substantial length of subsea umbilical. The shipment had a combined weight of 1,255 tonnes – including auxiliary equipment.

To prepare for the loading, Jumbo’s engineering team carried out a comprehensive finite element method analysis and shim plan – whereby the load of the carousel is spread evenly across the vessel’s deck. Shimming is accomplished by levelling up sections of the deck with steel plates of varying thickness.

Jumbo used its augmented reality (AR) HOLO lens technology for the operation – the first time the technology has been used for a client. The system uses AR software and AR glasses to locate predetermined positions with a high degree of precision.

Tijmen Bregt, project manager, said that carrying out this work with AR technology is not only more accurate but also saves time: “Using the HOLO system, our engineer was finished in about two hours, compared to one whole day using traditional methods.”

After loading and fastening, Jumbo Vision returned to Dusavik where the equipment was transferred to Subsea 7’s offshore construction vessel Seven Artic.

The operation is the first of two contracts that will see Jumbo supporting Subsea 7’s EPIC offshore projects for Total in Angola – named CLOV MPP and Zinia Phase 2, respectively.