The rental division of heavy lift specialist Mammoet has deployed one of its recently acquired LTM 1400-7.1 cranes to move several items for the expansion of a refinery on the US Gulf Coast. 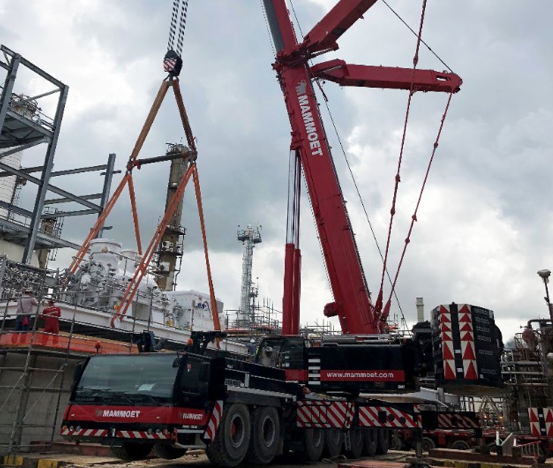 The project involved 22 transports and 19 lifts within a highly confined work area – occasionally with just inches of clearance.

The LTM 1400-7.1 hydraulic crane, configured with a TY boom, was used for all of the lifts and had to be repositioned five times in order to complete the work in the space available while several construction activities went on at the same time.

The crane was configured with a TY boom, which Mammoet said increased the lifting capacity of the unit so that it could install all of the components, the heaviest of which weighed in at 89 tons (80.7 tonnes).

The most challenging part of the project was the transportation of a 66-ton (60-tonne), 18 m flash drum. Mammoet used a custom-built transport frame to support the drum, moving the unit on specialised SPMT trailers along a route that included clearances between 7 and 15 cm.

Pierre Mille, branch manager of Mammoet Americas Texas East, said the project “demonstrates the increasing demand for lifting and transport at smaller scales along the Gulf Coast area. For this reason, we have recently expanded our rental fleet of hydraulic cranes ranging in capacity from 15 to 600 tons (13.6 to 544.3 tonnes),” he noted.