Mammoet has successfully completed the load-out and installation of the St. Jacques bridge in Montreal, Canada. 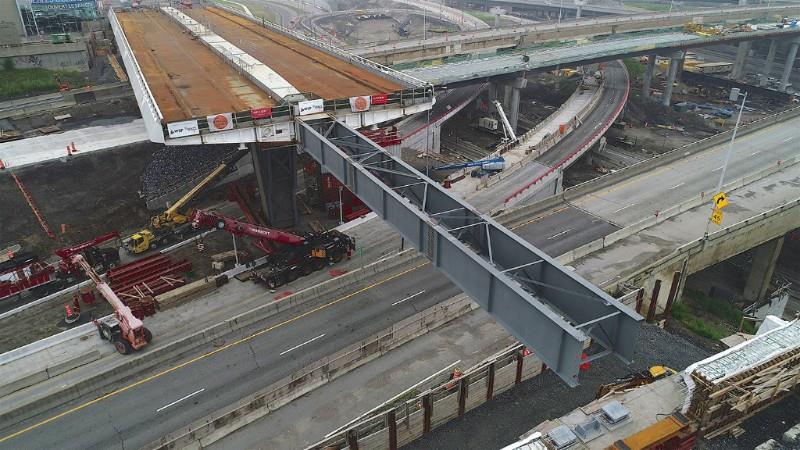 Mammoet, acting on behalf of the bridge developer Demathieu Bard – Aecon, used a new method of skidding to overcome site congestion and minimise disruption to traffic.

Mammoet’s skidding system usually consists of skid shoes placed in a skid track to move a load forward in a straight line. However, for this project it was not possible to use a skid track across the gap between the bearing points. The ministère des Transports de la Mobilité durable et de l’Électrification des transports (MTMDET) specified a new method to install the bridge across the two-lane interchange.

Instead, Mammoet designed a bespoke system consisting of separate skid shoes that could operate independently of a skid track. The remote-controlled shoes worked as separate units programmed in a synchronised, four-step sequence to push the bridge out across the span, without continuously moving the bridge forwards.

The skidding system was made up of Novarka skid shoes – the tailor-made 700-tonne capacity skid shoes used for the Chernobyl project in the Ukraine as reported by HLPFI here. (see page 25) 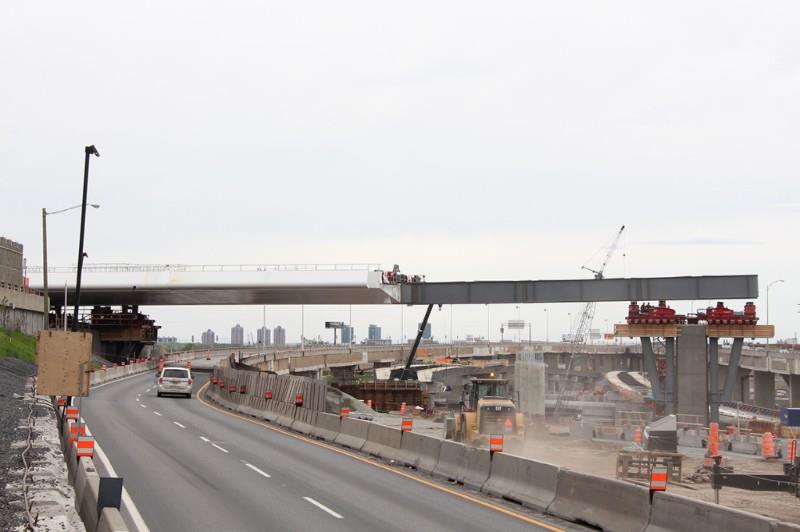 In order minimise obstruction to the road network, the St. Jacques bridge was assembled alongside the highway, before being launched in two phases.

In the first phase, one half of the bridge was jacked up and placed on a system of eight skid shoes and temporary supports. The system pushed the structure forward from the east side of St. Jacques Street.

At this point the middle pier between the highways was able to support the structure at two points. The remaining half of the bridge was then constructed on the east side and attached to the first section.

In the second phase of the load-out, the complete bridge was pushed out a further 66 m until it completely spanned the highway below. This phase required 14 individual skid shoes operating on the eastern side of St. Jacques Street. Mammoet completed the job by jacking the bridge down 2 m onto its foundations.

Mammoet said that by using this innovative installation method, the disruption to traffic was minimised to only two weekends and a few nights.