Sarens’ electric SGC-90 crane has been deployed for its maiden project – the replacement of two large columns as part of the turnaround of Valero’s refinery in Pembroke, UK. 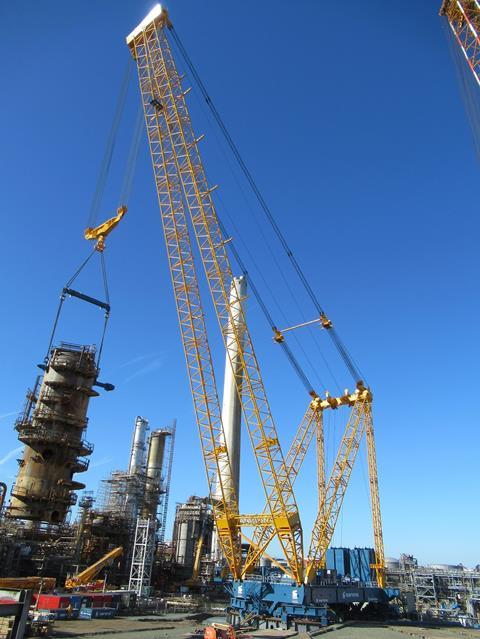 Sarens was tasked with moving the columns, weighing 456 tonnes and 438 tonnes, from the fabrication yard in northern Spain to the port of Pembroke, where the cargoes were unloaded onto SPMTs. The columns were then transferred on to a barge for shipment to the Valero heavy lift quay and moved to a laydown area.

The SGC-90 was then deployed to lift the two old columns and replace them with the new equipment. Sarens said: “The newest crane in the fleet was developed in response to market demand for heavy lift cranes with capacities greater than 80,000 tonne/metres. Its ring diameter is 35 m, maximum counterweight is 2,700 tonnes, and maximum load moment is 99,000 tonnes. It can be configured in a variety of ways, with main boom lengths of 100 m, 120 m, and 130 m and a small jib of 200 tonnes. The Sarens heavy-duty and light jib can also be used to reach further or attain a higher hook height.”