Wagenborg’s special delivery in the Netherlands

Wagenborg Nedlift has delivered two transformers for an expansion project at the Zeijerveen transformer station in the Netherlands. 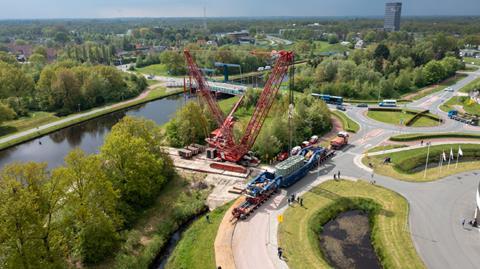 The 250-tonne transformers travelled via river from Zagreb in Croatia before arriving in the Netherlands. In Rotterdam, they were then transhipped on to smaller barges destined for Assen.

After a few days, the cargoes arrived at a transhipment facility at the Noord-Willems canal. There, Wagenborg’s 350-tonne capacity crawler crane lifted the cargo off of the barge ready for road transport to the project site.

For the 2 km final leg of the journey to the Zeijerveen transformer station, the 4.52 m-high transformers needed to pass under a viaduct that was 4.6 m-high.

Wagenborg devised a special transport solution to overcome this challenge. A 135-tonne girder bridge was transported from the UK, which allowed the heavy loads to be suspended between two side beams, enabling a low ground clearance.

The impressive combination was able to slide under the viaduct at walking pace with a margin of barely a few centimetres, Wagenborg said.