CEA first performed a survey of the local beach to ascertain the optimum position for the launch before excavating the beach and moving several tonnes of sand to create a temporary slipway, upon which steel plates were placed to support the catamaran and trailer combination used to launch the vessel.

A heavy lift ten-axle hydraulic trailer was used to raise and load the catamaran, and subsequently transport the boat half a mile from its building yard to the local beach, where it was slowly reversed down the slipway and placed in shallow water.

The luxury Heliotrope 80, which is the latest in the series produced by Thai boat builder Bakri Cono, uses a mixture of solar and diesel energy, and can produce up to 7 KW of solar energy.

After the catamaran had been successfully floated, CEA returned the beach to its original state without any environmental impact to the area. 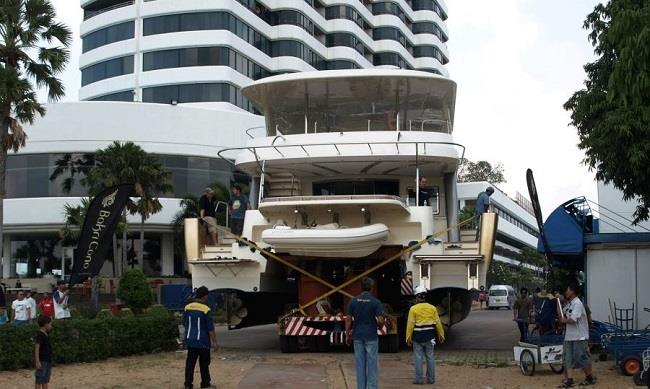 Nearby, after a year of laying the groundwork CEA Project Logistics Myanmar has become fully operational with a qualified team of staff and equipment.

In a recent project the Myanmar office brought in more equipment from Thailand to support a large contract they are handling.

CEA Projects is a member of the Project Cargo Network (PCN) representing Thailand.