The reactor will be used in the Tupras Refinery Project, located in Izmit, Turkey. According to Arancha Ruiz from Coordinadora Internacional, the 34.89 m x 7.95 m x 8.55 m unit was loaded in Japan, along with seven other reactors ranging from 500-700 tonnes.

Due to the outstanding weight of the largest reactor, the Turkish destination port of Derince had to be checked to ensure the quayside was capable of handling such a super-heavy load.

Ruiz explained that road transportation of the reactor from Derince port to the final jobsite was unfeasible, so a local flat pontoon was chartered to complete the project. The reactor was loaded onboard the pontoon through a ro-ro operation.

An earthquake had damaged the destination quay and it required reinforcement prior to the delivery of the cargoes. Furthermore, it was not possible to touch the first 5 m from the quay edge due to structural concerns resulting from that same earthquake, so Coordinadora's engineering department built a special 12 m long, 1,000-tonne load-bearing capacity ro-ro steel ramp to overcome the problem.

The largest reactor was discharged at Derince port directly onto 20 double-axles of SPMTs, which then were carefully positioned on the barge. Coordinadora calculated and managed then ballasting procedure on-site using its team of experienced project forwarders.

Coordinadora is a member of the Project Cargo Network (PCN) representing Spain. 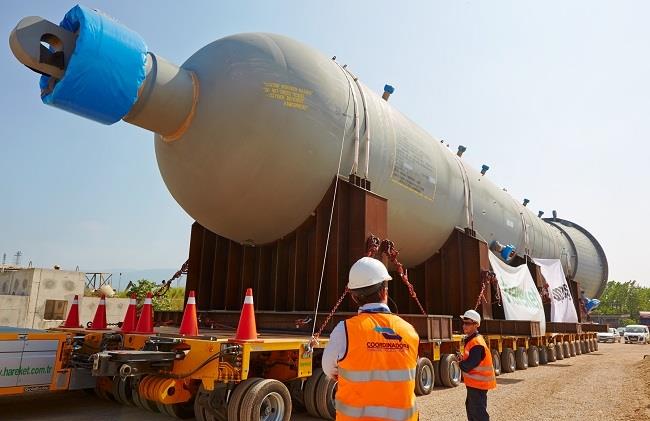