Krebs Korrosionsschutz is utilising axle lines of self-propelled MSPE modules from Cometto to support Liebherr with the construction of the 1,600-tonne capacity TCC 78000 crane in Germany. 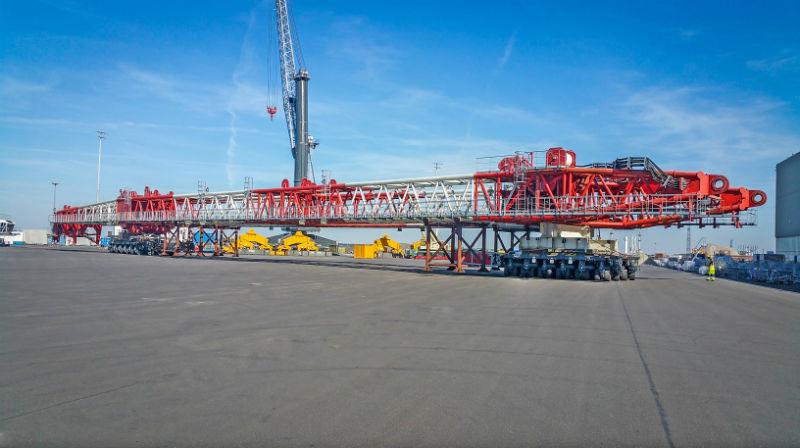 Using the MSPE modules from Cometto, Krebs is transporting components of the rail-mounted crane at the project sites in Rostock and Lubmin, including the 105 m long boom.

According to project manager Jörg Neuhäusel, the boom, which measured up to 15 m wide and had a weight of 362 tons (328.4 tonnes), was moved using 24 axle lines of Cometto MSPE modules. The two vehicle combinations were arranged 60 m apart; the steering was programmed to longitudinal drive so that the chassis could execute turns separately from each other.

The boom was transported onto a barge in Lubmin. For the loading, the large axle compensation in the chassis of the vehicles from Cometto levelled out the height difference between the quayside and the deck. Upon arrival in Rostock, the boom was offloaded and rotated, using the MSPE modules, ready for further work.

Once complete, the TCC 78000 will be used for handling heavy cargoes from the offshore, shipbuilding, industrial plant construction and logistics sectors, as well as for its in-house logistics processes such as the production, assembly and dispatch of maritime cranes, as HLPFI reported here.

Its first major operation is to install the HLC 295000 heavy lift crane - the largest offshore crane Liebherr has ever built - onto DEME’s wind farm installation and platform decommissioning vessel, Orion.