Netherlands-based trailer manufacturer Nooteboom has expanded its EURO-PX low-loader portfolio with the addition of the 4+6 IC Interdolly Compact. 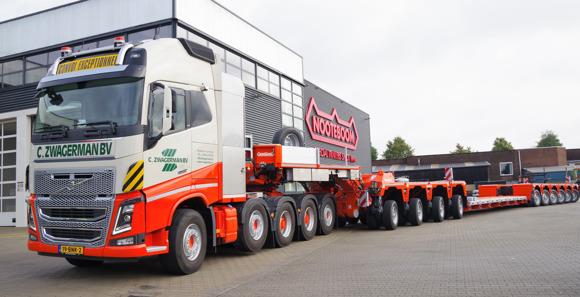 A four-axle model with six steered pendle lines at the rear, this is the largest low-loader in Nooteboom’s range. The first unit has been set up to comply with German regulations, with an axle load of 12 tonnes at 80 kmh providing a load capacity of 100 tonnes.

Speaking on behalf of launch customer C Zwagerman Transport, director and owner Cor Zwagerman said: “The cranes and machinery that we transport are getting heavier all the time… This Nooteboom 4+6 low-loader has several advantages for us. In order to adapt the low-loader, as far as possible, to comply with the German regulations for exemptions, the axle distance has been increased to 1.51 m instead of the usual 1.36 m.

“In practice this means that due to this larger axle distance, which minimises the load on bridges and viaducts, the exemptions in the various federal states of Germany are easier to obtain.”

Another advantage is the close coupling system, which facilitates conversion of the trailer into a ten-axle semi low-loader capable of carrying around 110 tonnes, Zwagerman said.

Netherlands-based C Zwagerman Transport specialises in the transport and assembly of cranes in Europe.