There has been news this week of the European Commission's MUNIN research project to develop an autonomous ship, which is primarily guided by automated on-board decision systems but controlled by a remote operator in a shore side control station.

Could this be the next big development in global shipping, like the arrival of the ocean container in the 1970s?

Or is it all a very expensive white elephant?

The jury is out, but Rolls-Royce predicts that by 2024 unmanned remote controlled ocean-going vessels will be carrying cargo, including heavy lift consignments, on short-sea routes. These drone ships are said to be the answer to a growing shortage of seafaring personnel in Europe, says MUNIN's backers.

This week's Friday Flyer is sponsored by DHL Industrial Projects, which aims to be the logistics partner of choice to the oil and gas, mining, power generation and construction industries. Its expertise in cargo scheduling and materials management means it can offer tailored solutions for unique outsize cargoes and heavy lifts.

Texas, USA based project forwarder UTC Overseas Inc. has established a new office in Mexico, which will be headed up by Roberto Lange.

Media reports in Tanzania are suggesting that breakbulk and heavy lift shipments are taking second place at the port of Dar es Salaam because of a deal entered into by the Tanzania Ports Authority (TPA) and Maersk Tanzania Limited, which gives priority at the port to the container line.

Jumbo Shipping has inked a contract with Ballast Nedam Offshore (BNO) to transport and install 80 transition pieces for the Butendiek offshore wind farm using the dynamically positioned heavy lift vessel Jumbo Javelin, which will lift, ship and install all of the pieces across ten voyages.

Indian media reports are talking up the prospect of a 270 m multipurpose cargo handling berth at Ennore Port, 24 km north of Chennai Port, to be built alongside the planned container terminal and operated on a PPP basis agreement.

Following the purchase of 21 Boeing 777-9X aircraft, Cathay Pacific Airways has ordered another 747-8 freighter as well as another three 777-300ER aircraft.

Conbit has delivered and installed an emergency shelter and a helideck module offshore Libya, on behalf of Mabruk Oil Operations for its BD-1 offshore platform. Mabruk Oil Operations, a joint venture between Total and NOC, ordered the two modules in 2012. Conbit was tasked with delivering each piece from Rotterdam in the Netherlands to Libya and completing the heavy installation work.

Chapman Freeborn Italy has coordinated an urgent cargo charter to transport a giant piece of machinery, which weighed 28 tonnes, for a biofuel plant project from Turin, Italy to Recife in Brazil.

BNSF Logistics and Smart Logistics have handled a consignment with a total volume of 1,600 cu m, including several pieces weighing 22.7 tonnes, of cement mill equipment from Izmir, Turkey to Houston, USA from where it will be delivered to a cement plant in Alberta, Canada.

A replica of the first ship to successfully circumnavigate the world, NAO Victoria, has taken the modern route from Palma de Mallorca in Spain to Port Everglades in Florida, USA on the DYT Yacht Transport semi-submersible vessel, Super Servant 4.

Fortune International Transport has moved two 100-tonne, 6 m high cylinders from a dismantled paper mill in Italy to the port of Marghera in Venice for oncarriage to India where the entire plant is being rebuilt. Fortune has already shipped more than 200 40 ft containers for this project, and over 1,000 cu m of equipment is set to sail at the beginning of this month.

Egytrans has transported two 233-tonne transformers (pictured bottom right), along with additional equipment and accessories, from the port of Alexandria to the Giza north power plant in Egypt. The transport required barging along the Nubaria canal for 250 km to a temporary jetty at Khatatba, designed and built by Egytrans, before onward road movement.

Evie notes the passing of one of the greats of heavy lift shipping, the founder of SAL Heavy Lift, Hans Heinrich, who unexpectedly passed away in his home on Christmas Day at the age of 67. Heinrich established the SAL office in Steinkirchen, Germany in 1980 before retiring in 2011 along with his brother, Claus Heinrich.

The family has asked for donations to be sent to the Duckdalben International Seamen's Club via the following bank details: Sparkasse Stade Altes Land, IBAN DE29241510051210120695, SWIFT NOLADE21STS 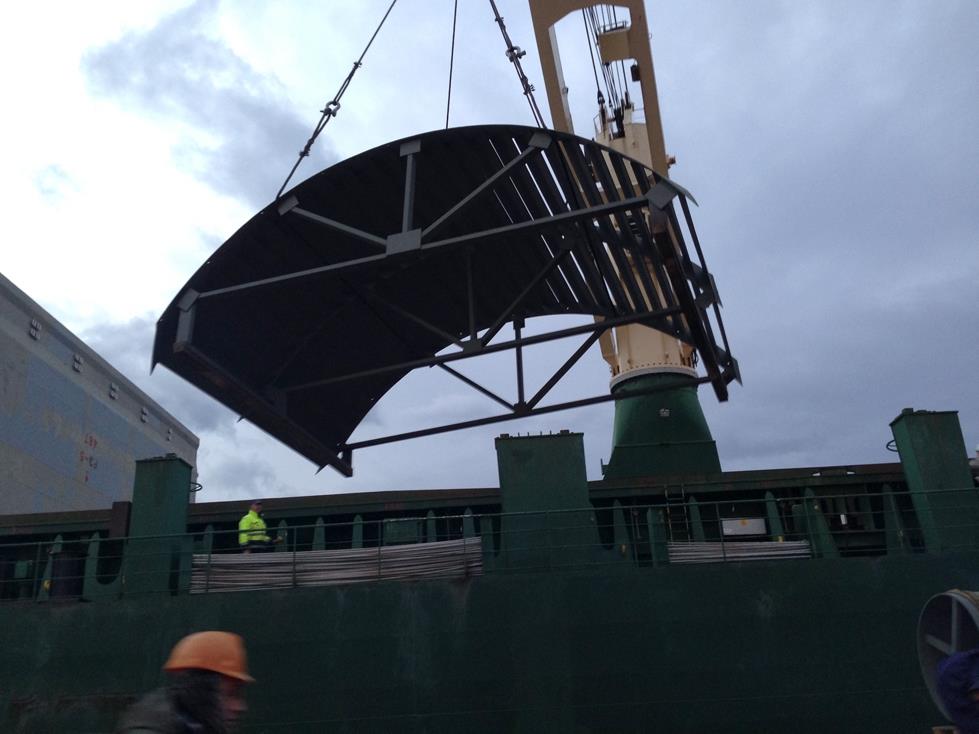