Blue Water Shipping is supporting the construction of an airport in Qaqortoq, Greenland. 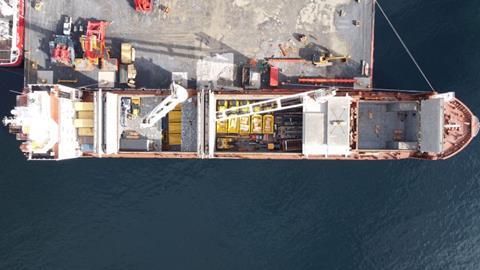 Pennecon Heavy Civil is the Canadian company awarded the contract for the airport’s construction. The past few years, Blue Water has been in dialogue with the company regarding a solution where it could assist Pennecon with its first shipments of materials and equipment. This has resulted in an agreement for chartering of vessel for loading material in two Canadian ports before departure to Qaqortoq for discharging directly onto barge.

The barge will navigate into a beach close to the site. Blue Water is also responsible for chartering of the barge and tug from a local shipowner in Nuuk.

“The project is in its initial phase, and loading of the vessel in Bacancour, Quebec, and Bay Bulls, Newfoundland, has been successfully completed. The vessel is loading in Qaqortoq at the moment. Blue Water handles the project in a close cooperation between our offices in Esbjerg/Denmark, St. John’s, Nuuk, Qaqortoq and Aalborg/Denmark”, said Rasmus Svane, project manager, Blue Water Esbjerg.

The construction of the airport will be in progress for the next couple of years.