The embattled STX Group has seen its biggest creditor become its biggest shareholder after the state-owned Korea Development Bank (KDB) traded debt for equity in the troubled shipbuilder and its affiliated shipping company STX Pan Ocean. The move by the K

In complete contrast, HLPFI notes that another new shipping line is set to enter the multi-purpose market with Symphony Ventures reported to have placed a contract with Ferus Smit to construct half a dozen ships with its brand-new ECOBOX design. The shipbuilder says that the very large single hold on each vessel is of completely box shaped form, offering a large loading floor area for project cargoes.

Boskalis has announced its Q3 2013 results, reporting higher revenue and earnings levels than in the first and second quarter, with its order book increased to EUR4.3 billion (USD5.8 billion). In terms of heavy lift, Boskalis' fleet utilisation at Dockwise was slightly lower than in the first half of the year.

A multi-billion-euro transport infrastructure project to link the inland waterways network of the Greater Paris region with that of the Benelux countries and beyond appears to be back on track after being called into question last year.

The Port of Everett has added a new Austral Asia Line (AAL) liner service to its list of regular ship calls.

SDV, a subsidiary of the Bolloré Group, has laid the first stone of its new building (pictured top right) located in Dubai Airport Freezone (DAFZ).

Nirint Shipping has announced that it is switching its Europe-Carribean-Canada-Europe (ECCE) service for all liner vessels, from the port of Moerdijk to the port of Rotterdam in the Netherlands.

Nurminen Logistics has handled the transportation of a total of 1,500 cu m of dismantled materials handling machines (pictured right) from Finland to Murmansk in Russia.

Volga-Dnepr Airlines has delivered a 23-tonne generator rotor on an IL-76TD-90VD freighter, from East Midlands Airport in the UK to St John's, Canada.

Tradelossa has transported several structures, each of which were 12 m long and weighed 130 tonnes, for Mexico City's new subway project.

Mexican company, Ingenieros Civiles Asociados (ICA) is utilising its Terex AC 500-2 cranes in the construction of an elevated ring road in Mexico City.

Russian freight forwarder, GTE Logistics has completed the relocation of geological machinery and equipment from Kharasavay to Nenets Autonomous Okrug in Russia.

Kalmar, part of Cargotec, has relocated an 850-tonne ship-to-shore (STS) crane for the Port of Helsingborg in Sweden.

CEA Project Logistics has launched a USD2 million 32-tonne catamaran on the eastern seaboard of Thailand.

The annual conference of the Project Professionals Group (PPG) will be held at the Tropicana Hotel in Las Vegas from May 7-9, 2014 following the American Wind Energy Association's conference, Windpower 2014, which starts on May 5.

Marvin Schlanger will pack his bags after stepping down from his role as CEVA Logistics ceo in January and pass the baton to Xavier Urbain (pictured top right), effective January 2, 2014.

Hellmann Worldwide Logistics has appointed Henrik Lund (pictured second right) as its new global airfreight director, based in Hamburg and reporting directly to Mark Hellmann, chairman of the global air cargo board.

Nurminen Logistics' president and ceo, Topi Saarenhovi, has stepped down and the board of directors has elected Olli Pohjanvirta to replace him, with immediate effect.

GAC has opened new offices in Louisiana, USA and Labuan, Malaysia, in response to the increase of offshore oil and gas activity in the respective regions.

Big-hearted Evie is a girl with a heart of gold, but even she is now feeling a spot of compassion fatigue as she is deluged with press releases about the freight industry's response and support for relief efforts dealing with the Philippines calamity. Enough, already. Worthy though all this logistics activities most certainly are, they are actions probably best left un-trumpeted.

OK, says Evie, haven't we all been led astray by the Sat-Nav? That is why she only has sympathy for the pilots of the B747 that mistakenly landed at a small Kansas airport not far from the air force base where it was supposed to land to deliver parts for the company's famed new 787 Dreamliner. The 747 landed at Col James Jabara Airport, about eight miles north of its intended target, the McConnell air force base in Wichita. Jabara's runway is just 6,101 feet long, much shorter than is ideal for an aircraft of that size. Oops. 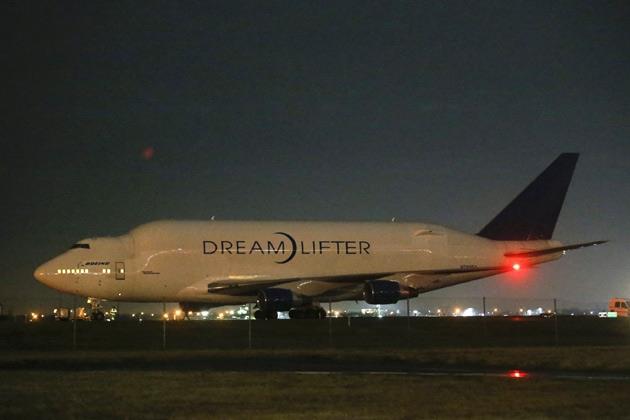