Wagenborg Nedlift has taken delivery of an ultra-heavy jacking system. 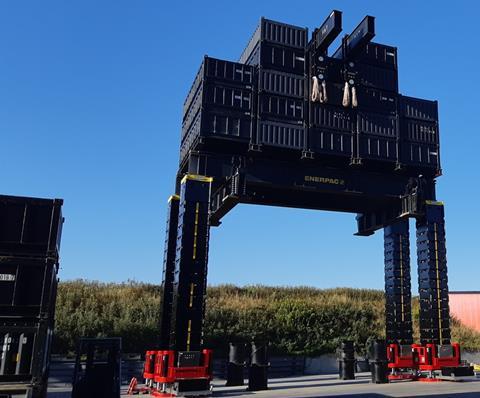 The system was delivered to the company’s site in Hengelo, the Netherlands. It can jack up items weighing as much as 3,200 tonnes to a height of up to 20 m. The system is completely computer-controlled and electrically driven.

Wagenborg Nedlift said the system uses jacking elements instead of beams. The jacking elements are placed at the bottom of the jacking units. This means that employees do not have to work at heights during the jacking operation, which enhances safety. It is equipped with so-called adjustable top-barrels (top parts that are fitted with a cylinder). This ensures that alignment during a jacking operation is quite straightforward, making the system flexible and efficient to use.

At the end of August, Wagenborg will deploy the new acquisition for the first time for the replacement of a bridge over the Dortmund-Ems canal. The old bridge will then be jacked up and brought on land by means of a sliding system, in combination with pontoons provided with a modular support system.