Wagenborg lifts in the Netherlands 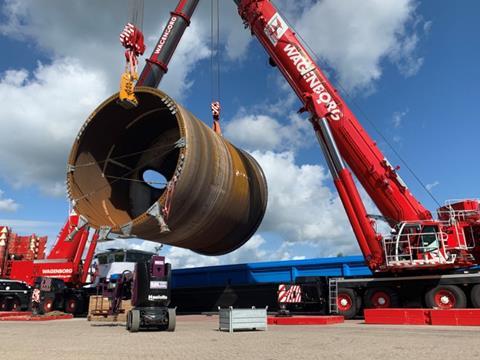 Each section weighed 163 tonnes and measured 10 m in height and 8.4 m in diameter.

The units were transported by barge from the manufacturing plant in Bilbao via Rotterdam to Breman Machinery in Genemuiden.

For the lift, Wagenborg utilised a range of mobile cranes, including a 700-tonne capacity Liebherr LTM 1650-8.1 crane. The sections were then moved to the construction hall on Scheuerle intercombi modular axle-lines where bolt holes were drilled.

Wagenborg Nedlifts explained that that levelling the bottom and drilling these bolt holes is a precision job of the highest order, and needed to be accurte to +/- two-tenths of a millimetre.

After processing, Wagenborg transported and lifted the 11 bottom sections back onto the barge in order to return to Bilbao via the same route.

The floating wind farm that lies 165 km off the coast of Norway will generate 88 MW for five offshore oil platforms at Snorre and Gullfaks oil fields in the Norwegian Sea. It is scheduled for commissioning during 2023.