Calabrese Autogru has deployed Cometto MSPE SPMTs to transport components of a tunnel boring machine for a project in Italy. 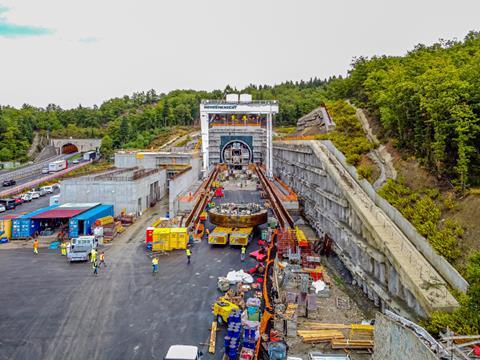 The move was required as part of a project that will see the construction of new tunnels along the 750 km-long highway Autostrada A1.

According to Cometto, the largest tunnel boring machine in Europe is being used for the construction of the tunnels. Last year, the unit excavated the 7.5 km Santa Lucia highway route through the Apennines mountain range, between Barberino del Mugello and Calenzano in the province of Florence.

Calabrese Autogru was contracted to transport the larger components of the machine from the south entrance of the Santa Lucia tunnel to the new motorway section, Nuova Variante di Valico.

For the transport of the bearing, which weighed 320 tonnes in total and had a diameter of 9.5 m, Calabrese utilised 20 axles of Cometto MSPE 2.43 SPMTs. Assembled in a side-by-side configuration, the configuration had a payload of up to 720 tonnes.

On each end of the combination, two 110 kW power pack units provided the driving force.

Alessandro Calabrese, company director, said: “The removal [of the components] was necessary in order to proceed with the completion of the inner tunnel construction. In a second phase, the component will be carried and transported to another location.”

According to Cometto, the difficult terrain could be managed due to the off-road characteristics of the SPMTs and the use of an electronic steering system – which provides high manoeuvrability.