Felbermayr is in the process of delivering four transformers in Switzerland, as part of a modernisation programme at a power plant in the Grimsel region. 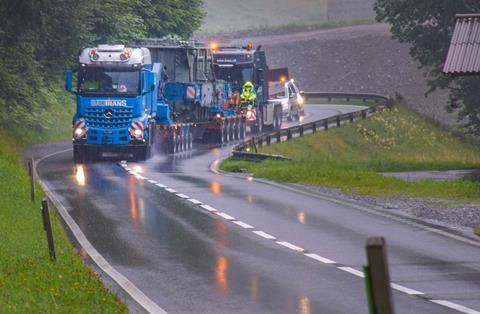 Siemens Trafowerk Linz tasked Felbermayr with the transport of the 95-tonne transformers, while Kraftwerke Oberhasli ordered the removal of the four old units.

The transport phase commenced at the end of July 2021. Two of the transformers were picked up at the Felbermayr warehouse in Linz and transported over the Brünig Pass to Meiringen, a town located in the Swiss canton of Bern.

Ingo Müller, project manager at Bau-Trans – a Felbermayr subsidiary – said the items are then moved 30 km via the Aareschlucht gorge to the Gerstenegg portal and then via a very narrow access tunnel to the planned destination – the powerhouse of the Grimsel power plant. There, the two transformers were unloaded with powerhouse cranes.

The first of the old transformers was then loaded and transported down into the valley to Innerkirchen to the headquarters of Kraftwerke Oberhasli. There, it will be dismantled and scrapped.

“Particularly challenging with this order was managing the planned transport route,” Müller explained. The transport with the 10-axle low loaders in particularly over the Brünig Pass posed a great difficulty, he said, due to the inclines, declines and tight curves both on the ascent and descent, with a total weight of about 250 tonnes.