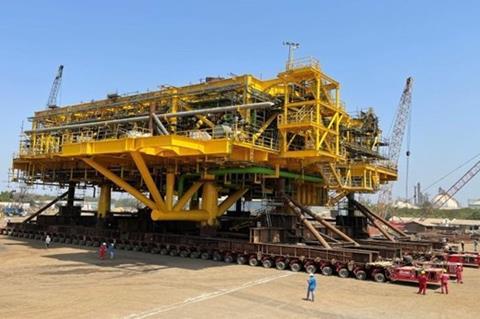 Larsen & Toubro (L&T) contracted Lift & Shift to handle seven modules with a total weight of 23,500 tonnes for the project. Five of the modules weighed between 3,000-4,400 tonnes, and one module tipped the scales at 685 tonnes.

The first module – weighing in at 4,432 tonnes – had to be shifted over 1 km on 188 axles and then rolled onto the barge. The module had a width of 52 m, which made it one of the widest modules that was fabricated and transported.

The second module, the West deck, weighing 3,700 tonnes was loaded on a total of 160 axles. The West deck also measured 52 m wide.

For the transport of the living quarter module, the combination had to navigate a hairpin turn. After a two-and-a-half-hour operation to reach the jetty, the module was rolled onto a barge.