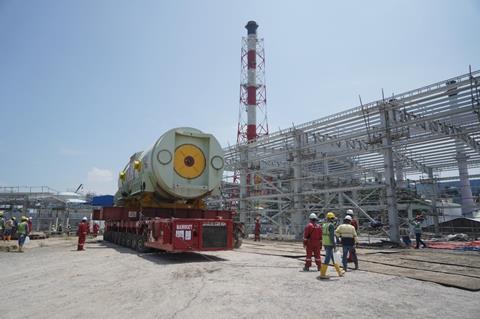 Mammoet transported the units on behalf of General Electric. The loads were moved one-by-one over a distance of 200 m from their storage area to the power block building, using 10 axle lines of SPMTs in a four-file configuration.

At the installation area, the two pieces of equipment were manoeuvred adjacent to their foundations and aligned centrally using the SPMTs. Four strand jacks then slowly lifted the slings placed around the lifting trunnions to a sufficient height, raising the loads from the SPMTs.

Once the loads were aligned on the foundation using self-propelled skid beams, they were slowly lowered. With the full weight of the equipment on the foundations, the slings were then removed from the lifting trunnions. Mammoet said this gantry system used was designed in-house and comprised four 200-tonne capacity strand jacks, 500-tonne self-propelled skid beams, 150-tonne skidding systems and customised lifting gantries.

Mammoet added that its team tackled space restrictions onsite and a tight timeline.