Over the past two years UTC Overseas has been busy transporting equipment to the new El Tesorito power plant in Cordoba Province, Colombia. 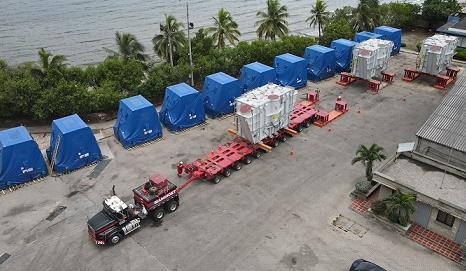 Cargo from around the world was shipped to the port of Tolú, a breakbulk and project cargo facility with the capacity and infrastructure to handle the equipment efficiently. Three vessels delivered the oversize pieces to the gateway.

The first shipment comprised 11 generators weighing 72 tonnes each, along with 8,845 cu m of additional equipment. The second vessel carried three transformers (97 tonnes a piece) and 460 cu m of accessories. The third vessel transported 11 assembled engines, which tipped the scales at 300 tonnes each and measured 6 m high. The oversized and overweight cargo originated in Brazil, Bolivia, Finland, Italy, Mexico and the USA. In addition to the equipment, there were over 400 containers of related material, said UTC.

“With any large-scale EPC contract, there are many challenges to overcome, but this one was compounded by the Christmas and New Year holidays, the pandemic, and supply chain disruptions,” said UTC. “A host of new, unfamiliar situations arose, such as port closings, labour shortages, and strict distancing and sanitary procedures. Weather also contributed as much of this move occurred during the rainy season.”

Despite advance planning and extensive road surveys, unannounced road construction began on the planned route to the jobsite, so alternate plans had to be devised quickly. Security measures were developed and implemented for the new route ensuring safe passage for the personnel and equipment in the caravans.

Moreover, the bridge that led to the construction site could not hold the weight of the assembled units and needed reinforcement. Due to excessive rain, the roads were muddy, and the river created high currents. The elevated water levels made excavation difficult, so a dam was constructed to impede the water flow.

UTC explained: “This type of work requires environmental licenses stipulating that everything must be returned to its natural state when work is completed. Due to this, the bridge reinforcements were deconstructed after the final equipment delivery.”

UTC also had to liaise with local communities along the transport route, as the electricity supply had to be taken off-line for six-hour stretches each time a caravan of trucks moved through one of the towns. It was a hard sell to win over the locals and garner support for the project. “The impact on the region was significant, but the long-term improvements would more than make up for the temporary disruptions,” said the company. Ahead of the project, UTC met with local communities to explain the project’s benefits.

Ignacio Benedetti, UTC regional director West Coast Latam, said: “This was a socially sensitive project. Power was interrupted as lines were moved to allow the large pieces to travel through towns on national roads. Generator backup did not exist, meaning residents and businesses were without power and water for long stretches - this happened multiple times over the course of a few months. We met with community leaders, business owners, and utility companies to explain the benefits of the project and the government’s investment in improving energy services.

“We shared an explanatory video to educate all concerned parties on the benefits of building up power resources in the area. To further complicate the situation, election training took place during one span of the project, and alternative energy sources had to be supplied so the training could be completed in time for election day.” 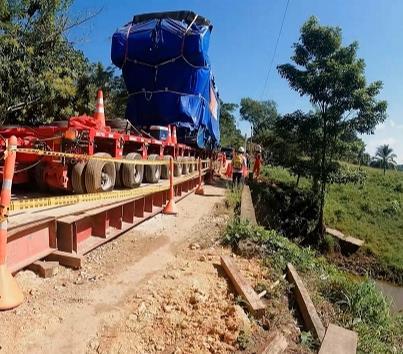 Jorge Duarte, UTC project manager, added that this project set a record for the heaviest items to be moved on Colombian roads. “To receive the necessary transport permits, bridge and infrastructure impact studies were required, and a route study and pavement calculations had to be completed to ensure weight compliance guidelines outlined in the permits were not exceeded,” he stated. “A thorough traffic control plan was also required, as was coordination with utility companies responsible for lifting the power, internet, and phone lines in the towns along the route.”

The equipment was moved to the project site on heavy-duty trailers. However, their large turning radius precluded them from entering the facility, so the oversized equipment was transferred to SPMTs to reach the foundations.