Channel projects move ahead in the USA 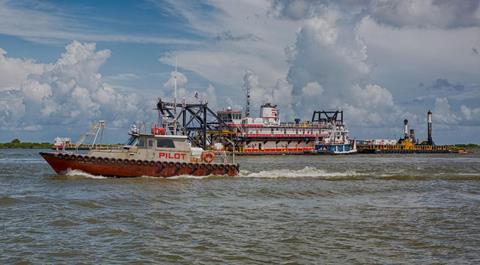 In Mississippi, Weeks Marine’s cutterhead dredger Captain Frank started dredging on September 11. Later in September, a second cutterhead belonging to Manson Construction will begin operations to work on the first phase of the project.

“The kick-off of this historic project is exciting for the entire maritime community,” said Brandy D. Christian, president and ceo of the port of New Orleans. “It is the culmination of decades of hard work by all stakeholders involved from the Big River Coalition to Congress and the critical support of the State and USACE. The deepening project will harness the economic power of the river and the most competitive global gateway in the Gulf of Mexico.”

In Freeport, Great Lakes Dredge and Dock Corporation received the contract for the first phase of the Freeport harbour channel improvement project, with construction slated to commence later in 2020.

The project, which will deepen the channel to depths ranging from 51 to 56 ft (15.5 to 17 m) and widen one channel section to allow larger vessels to call at Port Freeport, is broken down into five phases and is expected to take several years to complete. This first phase is scheduled for completion in May 2021.

“A deeper channel will enable Port Freeport to serve a wider range of global vessels which will expand our capacity, facilitate additional economic growth and support job opportunities for the entire region,” said Phyllis Saathoff, executive director/ceo of the port.