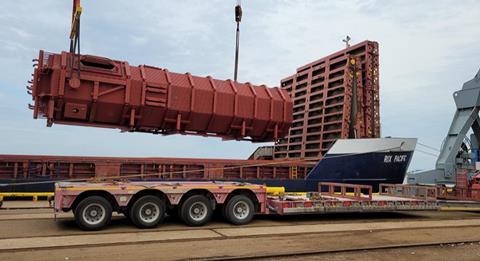 Initially, the plan was to move the components by road from Raciborz up to Gydnia and from there by ferry to Paldiski, Estonia. However, HBH’s partner in Poland found that the dimensions provided were incorrect. Upon retrieval of the correct measurements, the team discovered that the both the upper and lower part of the waste heat exchanger were between 30-80 cm larger than initially thought.

As a result, the parts were unable to be transported by road along the initial route. HBH then determined a new route: from Raciborz via Opole to Sczcecin and from there by a coaster vessel to Estonia. “The challenge of this move was the low water situation in the river from Opole to Szczecin,” HBH explained.

From the port in Estonia to the jobsite, the cargoes were transported on a semi low-loader.

HBH is a member of the XLProjects (XLP) network.